I  spent Christmas this year with my Aunt, Uncle and cousins in New South Wales. 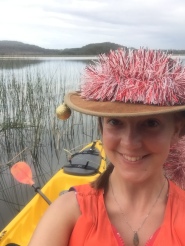 It’s currently the middle of summer, 25+ degrees every day, and we’ve been on 60km cycling adventures and went kayaking on Christmas day (although that was in the pissing rain…). It hasn’t quite felt like Christmas, but I’ve decided to make the most of it. If there’s one person that can always muster up some Christmas feeling, it’s this guy (pointing at myself btw). And in the spirit of the holiday, I’ve rewritten that old Christmas classic for you to enjoy…

‘Twas the night before Christmas, and near Hanukkah too,
Not a creature was stirring, not even a roo.
The bottle-o had been raided and the food prepped with care,
And the cookies and milk left for when St. Nick would appear.

The household was sleeping, all snug in their beds,
While visions of Christmas barbies danced in their heads.
But with all of this heat, I lacked a Christmassy jitter,
So I sat upright in bed wrapped in tinsel and glitter.

Suddenly out in the bush there arose such a clatter,
I sprang from the bed to see what was the matter.
I forgot about the tinsel wrapped round my knees,
I face-planted, recovered, and looked out to the trees.

The moon shone a light on the summer-dried grass,
It didn’t much look like my Christmases past.
And then, what to my wondering eyes should appear,
But a flash-looking sleigh, and eight gorgeous reindeer.

The driver looked a tad flustered with their rapid descent,
But the sleigh had survived without scratches or dents.
And then, for some reason, as if all a game
He shouted aloud and called each reindeer by name!

Now I thought this behaviour was ever so strange,
But it seemed wrong to interrupt a man so at home on his stage,
“Now, Dasher! Now, Dancer! Now, Prancer and Vixen!
On, Comet! On, Cupid! On, Donner and Blitzen!”

He set straight to work and gave the reindeer a drink,
“God, it’s so hot I barely know how to think!”
I stared open-mouthed as he unloaded his sled,
There was no way right now I was going to bed. 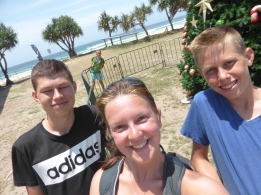 He lumbered to the door, not the roof, with his sack,
(There’s no house in Oz which really needs a chimney stack.)
As I drew in my head, and was turning around,
Through the front door St. Nick came in with a bound.

He wasn’t quite dressed as I traditionally thought,
His outfit completed with thongs and red shorts.
His skin glowed like his shorts after their long day of flying,
Slip-slop-slap: I left out Factor 50, I didn’t want Santa frying.

Still, his smile – how it glowed! His nose like a cherry!
Aviators perched on his head, above eyes oh so merry!
Wearing his shorts and his sunnies, sporting a well-kept white beard.
I kept pinching myself because it all seemed so weird.

In that moment he saw me and grinned ear to ear,
“My dear, I hear this year you’ve missed out on good Christmas cheer!”
I couldn’t speak out of shock but I nodded my head,
“Well then, I’ve got something for you,” in his deep voice he said.

He snapped his fingers and out of nowhere at all,
My Mum, Dad and bro stood confused in the hall!
A wink of his eye and a twist of his head,
“I can give you five minutes,” and he went back to his sled.

There were smiles and laughter, and no one was sad.
“It’s nice of you to come, but I’d have preferred an iPad.”
When our time was up, we said goodbye oh so slowly,
And for all of Santa’s trouble, I gave him a roadie.

He sprang to his sleigh, and soared up to the stars,
And they all flew away like the down of a galah.
But I heard him exclaim, ‘ere he drove out of sight,
“Happy Christmas to all, and to all a goodnight!”

One thought on “‘Twas the Night Before Chrissy”