London’s most famous bell, Big Ben, rang for the first time on this day (11th July) in 1859. Unfortunately, it rang for only two months, then it cracked and was silent for four years. There was also a bell before this one, although it only made it as far as New Palace Yard, in front of the Houses of Parliament, not up the tower itself. It was tested in 1856, but that one cracked as well after just two months. So not only does today mark a premature beginning in the stuttering early history of our current Big Ben, it wasn’t even the first bell.
Regardless, we’re still going to say today was an important day, and we’re going to use it to discuss lots of other fascinating London bells.

Even before I became a tour guide, one of my pet peeves was that no one actually knew what Big Ben was.

Sorry to burst your bubble, but this is the Elizabeth Tower.

And if you want to be really pernickety, in actual fact, this is the Elizabeth Tower at the moment:

Since 2017, she’s been undergoing a much-needed renovation to fix the chronic state of the clock mechanism as well as remedying the general decay, internally and externally, of the building. She is over 160 years old after all. As of February 2020, these repairs are due to cost an eye-watering £79.7m, and were originally set to be completed in 2021, but I don’t know if Covid-19 will have delayed this at all.

Back to Big Ben.
So while you can never see Big Ben, you can normally hear him. Big Ben is the bell. Although at the moment, Big Ben is only rung at New Year’s and on very special occasions. Big Ben is one of five bells at the top of the Elizabeth Tower, and funnily enough, even though I’m ranting about names and accuracy, Big Ben is just a nickname. The official name of the bell is the Great Bell of Westminster.

The bell is an impressive 13.5 tons, and was created by the Whitechapel Bell Foundry (which also produced the Liberty Bell in Philadelphia). The Foundry still exists (it’s listed in the Guinness World Records as the oldest manufacturing firm in Britain), but is now located in Stoke-on-Trent and Kent, rather than the original Whitechapel site, which is set to become a boutique hotel in the near future.

When Big Ben arrived at Westminster in 1858 to be installed in the Elizabeth Tower (then known simply as the Clock Tower), it was slightly too wide to fit vertically, so had to be winched up, horizontally, over the course of 30 painstaking hours.

Funnily enough, that crack in the bell which I mentioned at the beginning was never fixed. It’s still there. Instead of replacing the bell again, the powers that be decided to just turn Big Ben by a quarter and install a slightly lighter hammer so that less force was administered to a non-broken part of the bell! A small square was also cut into the bell to prevent the crack getting any bigger.

Big Ben isn’t London’s only fascinating bell.
“There’s more??” I hear you cry disbelievingly into your computer/phone screen (some in wonder, probably many others in despair).
I’ve listed a few of my favourites below.

I thought I’d start off with another of London’s most popular buildings: St. Paul’s Cathedral. At St. Paul’s you get, not one, but two important bells.

In the foreground, you can see a statue of Queen Anne who was the monarch at the time the cathedral was completed in 1711, but I want to draw your attention to the two towers which soar up to the sky.

The towers are topped with pineapples as a symbol of peace, prosperity and hospitality, and they house the bells of St. Paul’s. The left hand tower alone holds an impressive thirteen bells.

On the right we have our major bells. One is Great Paul, which actually predates the cathedral and is the largest bell ever cast in the British Isles at an amazing 16½ tons. Unfortunately it hasn’t been used in recent years because it has a broken chiming mechanism.

It’s joined by three other bells, including Great Tom. This is the hourly bell and the one which is also used to announce the death of senior members of the Royal Family, the Archbishop of Canterbury, the Bishop of London, the Dean of St Paul’s or the Lord Mayor of London.

I stumbled across this bell only recently.

The tower is all that remains of All Hallows Staining. A church has been on the site since the early thirteenth century, but the tower (c.1320) is believed to be from the second version of the building. Unlike many other churches in the City of London, the structure remarkably survived the Great Fire of London in 1666, but collapsed five years later (probably due to the number of burials which had weakened the foundations). The church was rebuilt but finally demolished in 1870. Only the tower remained. Funnily enough, it had a brief hiatus as a church between 1948 and 1954 when a pre-fabricated church was built around the tower and it was known as St. Olave, Mark Lane. It served as a temporary replacement for St. Olave, Hart Street which had been severely damaged in the Second World War!

The bell has a wonderful story to it. Allegedly, in the mid-sixteenth century, the church had royal connections to Princess Elizabeth, later Queen Elizabeth I. In 1554, she’d been held at the nearby Tower of London by her half-sister Queen Mary, who’d feared that Elizabeth was plotting against her. Elizabeth had found her imprisonment very distressing – she’d had no idea what was going to happen to her and to make matters worse, she’d been held in the former apartments of her mother, Anne Boleyn, who was also executed at the Tower. On Elizabeth’s release, later that same year, it is said that she attended a Thanksgiving service at All Hallows and donated new silk bell ropes to the church. She claimed it had been the sound of the bells at All Hallows’ Staining which had got her through the stress of her imprisonment. It’s so sad that we can no longer hear those bells, but possibly one of them (dating to 1458) is now kept safe at Grocers’ Hall in the City of London.

If we’re talking about London bells, I can’t really get away without mentioning that nursery rhyme. You know the one I mean. It echoed through your head as soon as you realised you’d clicked onto (intentionally or not) a blog post about bells in London.

“Oranges and lemons say the bells of St. Clement’s…”

One possible candidate for the famous St. Clement’s is the church at the eastern end of Strand: St. Clement Danes. It was designed by architect Christopher Wren in the seventeenth century, replacing a previous church, and the bells, like our Big Ben, were cast by the Whitechapel Bell Foundry. Nowadays it’s dedicated to the Royal Air Force.

Luckily, this entry to the blog post, doesn’t just have a story, but a video as well! Here are the bells in all their glory.

It’s even playing the nursery rhyme!! Some childish excitement bursting out there.

Here’s the full rhyme in case you’d forgotten it:

The origins of the nursery rhyme, like many others, is unclear. The last lines, admittedly giving the rhyme an abruptly morbid tone, have led to some theories that it’s a reference to executions or Henry VIII’s tendency to behead his wives. In the earliest known publication of the rhyme, however, in 1744, it is substantially different and those final lines don’t exist at all. Now, this isn’t to say that the 1744 version is the first version or the correct version. Most likely, it was just one of many, many variations which had been in circulation for generations.

Never fear for all you gruesome history fans! Even if the origins are unclear and those last lines a later addition, we could deduce instead that the “chopper” is a reference to Newgate Prison, located next to St. Sepulchre’s church (“the bells of Old Bailey”). When the bell struck nine on Monday morning, it would signal the start of any hangings due to take place that week. So not a “chopper” per se, but executions nonetheless. You can decide whether the connection is too tenuous for you.

Nevertheless, the rhyme gives us a good sense of the important churches of the day in and just outside the City of London, and if you ever have a read of the longer version, it’s a nice link to the historic trades which you would have in the vicinity of these churches.

There is a good reason why this particular bell is in this particular building. Despite the company’s location in a deceptively modern, space age building, Lloyd’s of London has a history stretching back centuries. The first known mention of it was in the London Gazette in 1688, referencing a coffeehouse run by Edward Lloyd in Tower Street, near the docks. Being near the docks, it was naturally popular with sailors, merchants and ship owners who would discuss their common interest: shipping. No doubt Lloyd noticed this and realised that there was a business in providing them with reliable shipping news. This developed into the provision of marine insurance, and to a large extent, the rest is history. Jump forward to the late eighteenth century, Lloyd’s had insured the cargo of the HMS Lutine, a large amount of gold, silver and spice, which was travelling from the City of London to Germany. Unfortunately, the frigate capsized off the coast of the Netherlands, the entire 240-strong crew (bar one) died and all of the ship’s cargo was lost to the depths of the sea. It was a huge financial loss for Lloyd’s, but a silver lining of the disaster was that it cemented a reputation for Lloyd’s that they would settle claims even at extraordinary loss for them.

While the cargo was never recovered, the bell was salvaged from the wreck in 1858 (the same year Big Ben was cast!), and has hung in Lloyd’s of London’s various headquarters since then. It became a tradition to ring the bell twice when ships arrived at their ports safely, and a single ominous ring if a boat was lost or shipwrecked. This tradition has morphed into general announcements of big news. Again, it’s twice for good news, and once for bad. The last time it rang was on 19th March 2020: to mark the closure of the underwriting office in the midst of the Covid-19 pandemic.

So I hope you’ve enjoyed a tour through some of London’s most impressive bells. It might be too niche a question, but do you have any favourite London bells or know any stories about them? I’m definitely no expert, just a fan. Imagine me swinging through London’s belfries, Hunchback of Notre Dame style. That’s definitely how I spend my time.

Join me on social media: 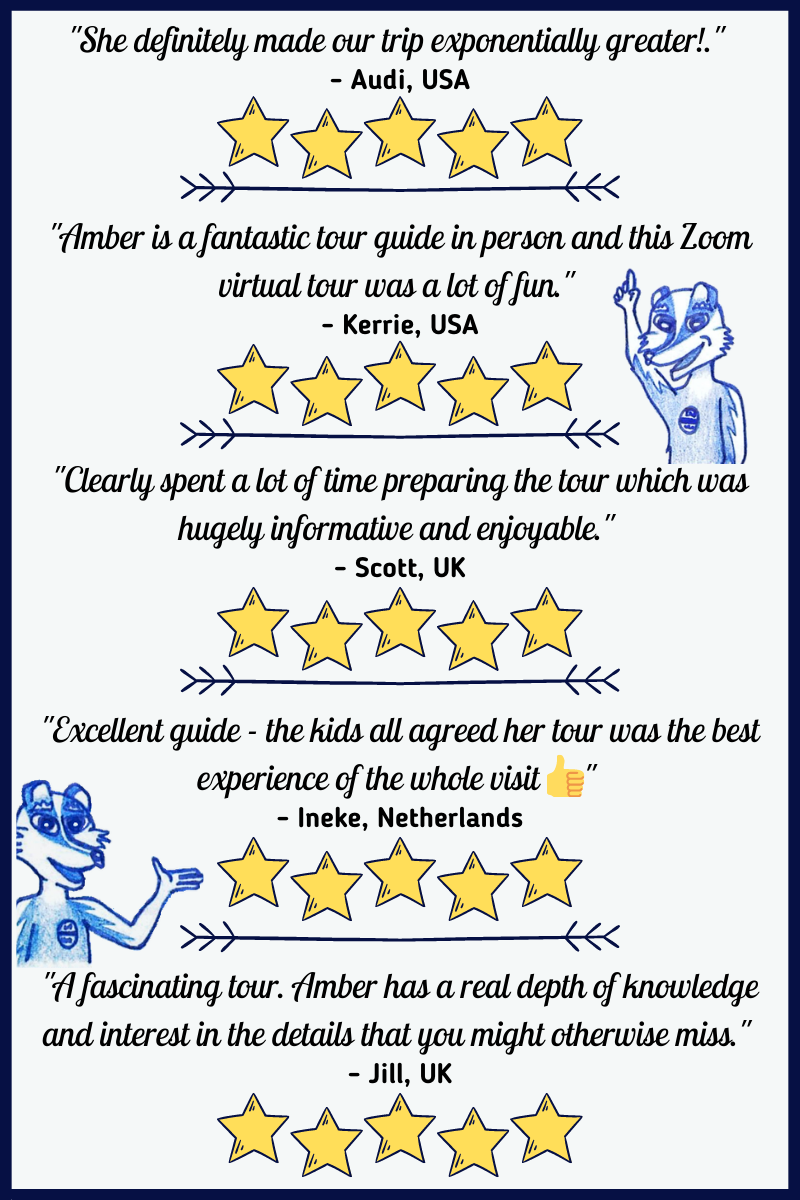